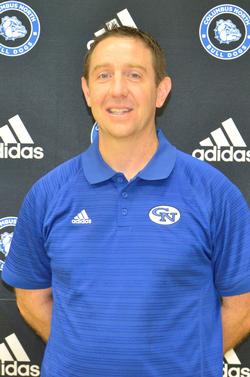 Paul Ferguson was hired Monday (April 27, 2015) as the new boys' basketball coach at Columbus North High School.
Ferguson, a 1994 Notre Dame graduate, has coached in the Chicago area for the past 21 years, including a 133-55 record in seven seasons as head coach at Wheaton Academy. His ledger at the private high school included five conference championships, regional titles in 2009 and 2011, and a school-record 27 victories in 2011.
Ferguson, teams typically play an up-tempo style that both players and fans enjoy.  He was selected an Illinois District Coach of the Year in 2011. His teams produced two Illinois all-state players and three NCAA Division I signees during his tenure at Wheaton Academy.
The Connecticut native was previously an assistant coach for two years at Wheaton College, an NCAA Division III program that went 32-23 in that span. He also was an assistant at Wheaton College from 1999-2006, prior to serving as the Wheaton Academy head coach from 2006-13.
Ferguson began his coaching career in 1992 while attending Notre Dame as a student assistant to John MacLeod in the Irish program. Following graduation, he served as an assistant for one season at Brother Rice High School in Chicago before moving to Wheaton Academy as a history teacher and assistant coach.
He worked there until taking a position on the Wheaton College staff in 1999, then returning to Wheaton Academy as head coach in 2006.
Ferguson also has been a varsity tennis coach, athletic director and director of admissions at different points during his time at Wheaton Academy.
At Columbus North, Ferguson serves as a dean of students.
Ferguson's wife, Michelle, grew up in Indiana and has relatives in the Indianapolis and Fort Wayne areas. The couple has five sons -- Ty, 14, Benjamin, 13, Caleb, 11, Samuel, 8, and James, 5 and a daughter Annie 2
Contact: