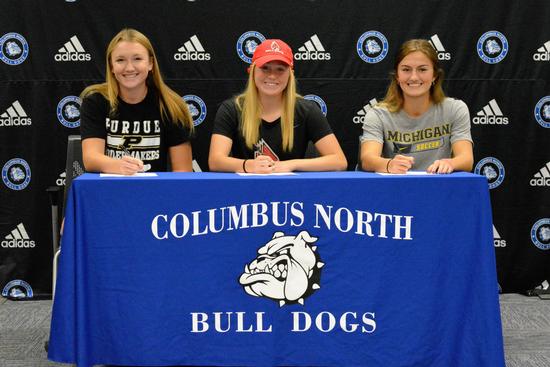 Jenna Lang has signed to play soccer at the University of Michigan (Division 1).  Lang was presented offers from Indiana University, University of Wisconsin, and Butler University.  Lang was named team MVP,  First-team All-Conference Indiana, First-team All-District, and First-Team All-State following each of her four high school seasons.  Lang was named High School All-American following the 2020 season.  Lang holds school records in goals scored in a season, goals scored in a career, and total career points.  She was The Republic Girls Soccer Player of the Year following the 2019, 2020, and 2021 seasons.  Lang plans to study Business with a minor in Kinesiology at the University of Michigan.

Ashlie Wilson has signed to play tennis at Purdue University (Division 1).  Wilson also had offers from Ball State University and IUPUI.  Wilson led the girls tennis team to Conference Indiana, Sectional, and Regional titles during the 2021 season last spring.  She was named team MVP after her sophomore and junior seasons. She was named All-Conference and All-State as a sophomore and junior.  Wilson has been named The Republic Girls Tennis Player of the Year after each of the past two seasons.  She plans to major in Marketing at Purdue.

Congratulations and best wishes to these student-athletes.  Bull Dog Nation is excited to watch you excel at the next level as you did when you represented the Bull Dogs.

Photo:  (L to R) Ashlie Wilson, Emily Ellis, and Jenna Lang sign their National Letters of Intent to play at their respective universities at a Nov 17 signing ceremony at Columbus North High School