2 months ago by Jason Perry 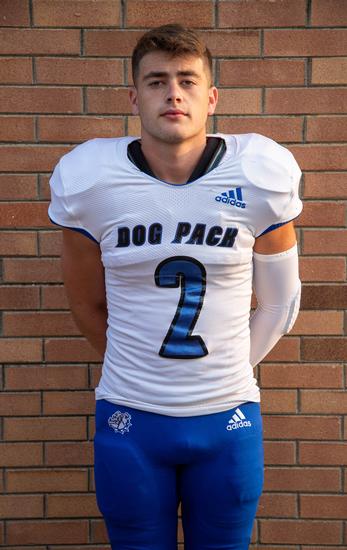 October 2, 2021 - Undefeated and Class 5A third-ranked Bloomington South came to Columbus North to take on the Bull Dogs for their Homecoming game in a matchup that will be important in deciding the Conference Indiana title.  The Bull Dogs (4-3, 3-0) trailed 10-7 early in the second quarter, but dominated the remainder of the game with 24 unanswered points to defeat the Panthers (6-1, 3-1).  The Bull Dogs now sit alone atop Conference Indiana with games remaining against Bloomington North and Terre Haute South.

Quarterback Luke Hammons passed for 248 yards on 14-of-22 passing, with four touchdowns (three to Keegan Castetter, who had five receptions for 139 yards, and one to Cooper Horn) and one interception.  Dyllan Redmon rushed for 100 yards on 17 carries to lead the Dogs, who accumulated 382 total yards of offense.  The Bull Dog defense held Bloomington South to 211 total yards, and the Bull Dogs dominated time of possession (29:49 to 18:11).  Jaxson Scruggs returned a blocked field goal attempt by the Panthers for a 66-yard touchdown for the Dogs’ final score.

The JV and freshmen teams completed the program sweep of Bloomington South on Saturday, October 2.  The JV final won 13-12 and the freshmen won 22-12.

The Dogs will be on the road next Friday, October 9 at Bloomington North.  Kickoff against the Cougars is scheduled for 7:00 pm.

Photo: Luke Hammons passed for 248 yards and four touchdowns in a 34-10 Homecoming victory for the Bull Dogs over Bloomington South.