1 month ago by Jason Perry 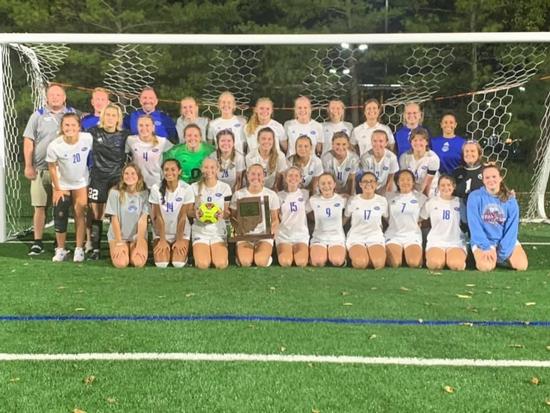 October 10, 2021 - “One mistake,” was head girls soccer coach David Young’s response at halftime of the girls soccer Sectional Championship match as he saw his Bull Dogs trail 1-0 to Columbus East.  “Fortunately,” he continued, “we’re a team that overcomes adversity.”

Overcome they did, as his seventh-ranked team battled back to tie the match in the second half with a KJ Ely goal (assisted by Rion Stevens), forcing a pair of scoreless overtime sessions and a second consecutive match that would require Penalty Kicks to determine the outcome.  The Dogs (15-1-2) and Olympians (11-6-1) each converted on 4-of-5 PKs in the first round, before each team had to select five more players to alternate PKs in a sudden-death format.  North’s Riley and Kara Kolhouse each converted their kicks in sudden death, but were answered by Columbus East.  Anna Donica then converted the Bull Dogs’ third sudden death PK, but goalkeeper Mallory Gilley stopped East’s attempt, ending the match and securing the Sectional Championship for the Bull Dogs.

The Bull Dogs will host fifth-ranked Bloomington South (18-0-1) in the Regional Semifinals on Wednesday, October 13 at 6:00 pm at the BCSC Soccer Complex. The Dogs and the Panthers battled to a 1-1 draw when they met on September 20, and they shared the Conference Indiana title. The winner of the match will face either Castle or Floyd Central in the Regional Championships on October 16.